The Ghost Ship of Prince Edward Island by Anita Davison

Whilst doing research of the island for Envy The Wind, I came across a ghost story about a ship which has appeared since 1768 in the Northumberland Strait  the stretch of water which separates Prince Edward Island from Nova Scotia and New Brunswick.

This ghost ship doesn’t have a name, but is described as having ‘crisp white sails and a black shiny hull’ that are completely engulfed in flames. She is not always sighted in the same place or a specific time, although more often between September and November whe she is believed to be the forewarning of a north easterly storm.

The ship appears so real, that on occasion attempts have been made to rescue the crew. One of these occurred in Charlottetown Harbour around 1900, when a group of sailors reported they could see members of the crew running back and forth to avoid the flames. The sailors took out a rowboat and raced toward the ship which disappeared before they reached it. A thorough search was carried out by divers, but no shipwreck was found.

On occasion,  a large number of people witnessed the ship's appearance simultaneously, all saying it  was moving fast, even on nights when there was no wind. One sighting was described as follows: [paraphrased]

As it came nearer it seemed to lose speed and stopped opposite our house. We got up on the banks to watch but there was no sign of anyone on board and no dory on tow. About ten minutes after she stopped, smoke began to rise slowly over the deck. There were men who seemed to come up from below and run around the deck in every direction as flames spread across the deck. Men climbed the masts, but when they were halfway up, all the sails caught at the same time. The men were no longer visible as the ship was engulfed in flames. We watched it until the flames died and everything crumbled to the deck. The hull gradually sank lower in the water until it disappeared.

Ferries crossing the Strait between Nova Scotia and Prince Edward Island before the Confederation Bridge was built, often encountered the phantom ship. A ferryboat captain reported sailing straight through the flames finding nothing, while another claimed to have seen “a burning vessel appeared aglow with fire and was moving fast.”

In 1885, a group of rescuers attempted to help the burning ship were lost themselves, never to be heard from again – although this could be apocryphal as I couldn’t find any specific evidence of this event.

In January 2008, 17-year-old Mathieu Giguere claimed to have seen the ghost ship, describing it as a “bright white and gold ship” During some sightings, witnesses also claim to hear gunfire, or a ball of fire in the sky.

In 1905, a New Brunswick scientist William Francis Ganong suggested the nature of the light described in sightings could be a natural electrical phenomena on the surface of the sea which rises in columns, and resembled the flaming rigging of a ship. Another explanation is that the ship is a bank of fog reflecting moonlight, or the setting of the moon on the horizon. Not as romantic as a burning ghost ship, but at least it does not have its origins in an ancient disaster.

The stories of the sightings don’t vary much, even though the ship was viewed from both sides of the strait, the south coast of Prince Edward Island, the North coast of New Brunswick and Nova Scotia, as well as Caribou Island and Pictou Island.

Some feel this ship might be The Isabella, a schooner which set sail with a cargo of lumber in December 1868 and was lost at sea off Labrador. She was last seen by a lighthouse keeper on Amet Island during a violent storm off Nova Scotia, but no trace of her was ever found.

Other theories are she is an immigrant ship of Highland Scots, lost at sea while searching for new land, or a pirate ship sunk near Merigomish by a British warship during the Napoleonic War. One explanation is she was a pirate ship that pillaged a ship from England, then the crew got into a drunken brawl with another pirate ship over the spoils during which both ships caught fire and all hands were lost.

"There's a burst of flame and a flash of light
And there on the tide is a frightening sight
As a tall ship all aflame lights up the sky
Tales of the phantom ship, from truck to keel in flames
She sails the wide Northumberland Strait
No one knows her name.”

From "Tales of the Phantom Ship" a song by Lennie Gallant 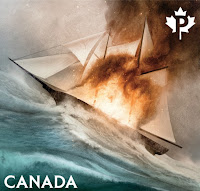 Personally, I don't believe in ghosts, or the paranormal, and maybe the 'light phenomenon' explanation is feasible. However, islands in general often have romantic tales connected with the sea which are passed down through the years which add to their character.
After all, stranger things happen at sea.
Posted by Anita Davison at 3:00 AM