Bet you thought I had forgotten to interview Victoria Chatham.  But you were wrong ... here she is!

Tell us a little about yourself? Perhaps something not many people know?

I had a varied education due to being an army brat and finished my English schooling with passes in five subjects, the exams being similar to the North American graduation system. I couldn’t wait to leave school and work with horses, but back then it wasn’t legal to leave home until the age of eighteen, so for two years I slogged it out first in a bank, then in a local factory’s wage payment office. Horses are my life-long passion, from my first ride on a beach pony when I was five, to the palomino quarter horse I rode on my last trail ride this summer. I loved the discipline of side-saddle and dressage, enjoyed riding cross-country but show jumping was never really my favorite thing to do. However, I do enjoy volunteering at Spruce Meadows, a world-class show jumping venue just south of Calgary, Alberta.

When did you first realize you wanted to be a writer?

When I was at school. I loved my English classes, both Literature and Grammar. I wrote several prize-winning essays but my attempts at writing fiction, while I enjoyed writing stories, was a source of amusement to my family. Writing was always referred to as my ‘little hobby’ and I did not have the confidence to try again until I was in my fifties. So, if there are any late bloomers reading this, take heart. It is never too late. Find yourself a good writing group and get to know other writers. Only writers understand writers so it’s important to get that support.

What is your work schedule like when you're writing?

Manic. I would love to have a process! When I wrote His Dark Enchantress I was very disciplined. 9am-1pm or 10am-2pm every day except weekends. I’d sometimes go back to it in the evening and revise what I’d written in the morning, but not very often. His Ocean Vixen was written scene by scene whenever I felt like it and quilted together. Loving That Cowboy was again a scene by scene quilting effort. Brides of Banff Springs was somewhat more orderly. First I did my research, again usually four hour stretches of reading and making notes. Then, because I was so spoilt for choice with the material I had, I discarded several chapters because the flow was not there and the story felt so contrived. Then it was back to what material did I have and where did I want it to come in the story? Most days when I’m working on a book I try for those four hour periods, but then when the writing starts to come together I will write as much as I can.

Do your characters seem to hijack the story or do you feel like you have the reins of the story?

This is such a pertinent question for me! My characters tend to take over and sometimes I have to put them in their place. The most intrusive character of all was Lady Juliana Clifton in my first Regency romance, His Dark Enchantress. She was the hero’s sister and every time I started to bring in his love interest, Emmeline Devereux, Juliana would butt in. Finally I promised her a book of her own (she has the lead role in His Ocean Vixen). She is such a tenacious character that she is also mentioned in my Edwardian trilogy as she is the great-great-grandmother of my heroine in that series, Lady Serena Buxton. I don’t think she’s likely to surface again, but I who knows? 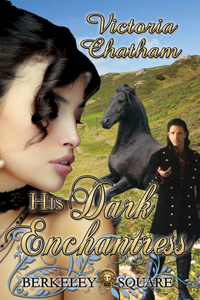 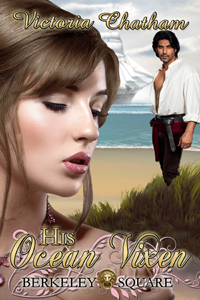 What do you like to do when you're not writing?

Oh, gosh. Take my pick why don’t I! Reading, of course. I don’t think anyone can be a writer without first being a reader. I love movies and go every other week to the cinema and also watch movies on Netflix. I’ll watch anything except horror movies as I don’t like being scared but if I’m honest I love animated movies the most. My all time favorite is Disney’s Robin Hood with The Jungle Book being a close second. When I get out of the house, I hike, trail ride and camp in summer and snowshoe in winter. I love meeting up with friends and just chatting. I’m now retired but quite honestly, with all I do, I don’t know how I ever had time to work at a full time job.

What was one of the most surprising things you learned in creating your books?

That it takes a village to write a book! Honestly, by the time you’ve done your research and possibly had some brain storming sessions, you really do have a team to work with. It took me a long time to open up to the idea of working with critique partners, but now I have two who I trust implicitly. Wherever they pick me up, I know I have to look at it carefully. It might be Point of View (mine can still sometimes go awry), or an undeveloped plot point, or a grammatical issue. I also have two very good beta readers who will point out any weaknesses.

Well there you have it folks - the wonderful Victoria Chatham.  I wonder if I could convince her to start singing "Robin Hood and Little John, walking through the forest ..." with me. I LOVE that movie!   Although, Fantasia will always hold a special place at number one for me.

Anyone has any questions for our Vicki?

Posted by The Historian at 8:00 AM