Do You Believe in Ghosts? by A.M.Westerling


This month’s topic is ghosts and seeing as how I’m rather ambivalent about whether or not ghosts exist, it might be a short post. Having said that, mind you, if someone asked me to spend the night in a “haunted” room I would politely decline!

There are a couple of haunted venues that I’m aware of here in Calgary, one is the Hose and Hound pub in Inglewood, one of the older areas of town. Victoria Chatham mentioned that in her post earlier this month so instead I’ll talk about the Prince House. 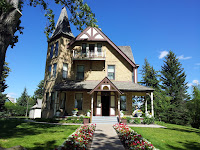 It’s in Heritage Park, a living museum, and it is rumoured to be haunted by the ghost of a smiling young woman carrying a baby in her arms. A bright glow is reported to shine from the third floor despite the house having no electricity. I’ve walked through the Prince House but never felt anything but then again, that was during the day. A good friend of mine saw the spectre in one of the windows, though, and she said it was creepy. I’ll take her word for it. *wink*

Then of course, there’s the ghost town of Barkerville, the one time gold rush town where I've set my Canadian Historical Brides book Barkerville Beginnings. I’m sure there are too many ghosts there to count! However, I’ve found a few: Madame Fannie Bendixon, the woman who offered Rose a job, has been seen peering out an upstairs window of the saloon she once owned. There are also reported sightings of the ghost of a young woman wandering the cemetery.

Although I wasn't able to discover any ghosts of specific miners, Barkerville is, after all, a ghost town so I'm sure the spirits of these fellows might be wandering around.

Apparently, the Royal Theatre in Barkerville is haunted. People have seen an apparition of a man dressed in turn of the century clothing, and have heard odd sounds and footsteps on the stage at all hours. There’s also a ghost that plays the piano and he’s been seen a number of times. The St. George Hotel also has a phantom, a young blonde woman dressed in white who appears around midnight in the rooms of lone male visitors.

Finally, in my book Barkerville Beginnings, I make reference to the grave of Charles Morgan Blessing, murdered on his way into Barkerville.  Apparently his ghost roams the streets of the town too. Um, I’ll believe it when I see it?!