I've learned a lot about Canada in writing my novel, due out in January 2017. On a Stormy Primeval Shore is set in 1784. Englishwoman Amelia Latimer sails to the new colony of New Brunswick in faraway Canada. She’s to marry a man chosen by her soldier father. Amelia is repulsed by her betrothed, and refuses to marry him. She is attracted to a handsome Acadian trader, Gilbert, a man beneath her in status. Gilbert must fight the incursion of English Loyalists from the American war to hold onto his land and heritage. Will he and Amelia find peace when events seek to destroy their love and lives.

On a rainy, foggy day in 2017 my husband I took a ferry across the Kennebecasis River to Trinity Anglican Church, one of the oldest churches in New Brunswick. It was built in 1788/9 by the Loyalists who fled the American War of Independence. Because of their loyalty to England, their property was confiscated and they were forced north from the new United States. 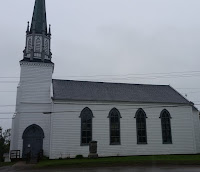 Beside the church is the Loyalist Cemetery with its weathered headstones, many dating to the eighteenth century.

Unfortunately, I couldn't find any ghost tales related to these two sites, but had to use the pictures my husband took.

For the ghost tale, I'll return closer to Saint John on the Bay of Fundy, where much of my novel takes place, and Fort La Tour (long destroyed).

The fort was established in 1631 in what was then known as Acadia. (my novel's hero, Gilbert, is an Acadian man born over a hundred years later). The fort was used for fur trading, but the French fought over who controlled the region. While Charles de la Tour, who'd built this fort, was away in Boston, his wife, an actress named Francoise Marie, defended the fort from attack. On Easter Sunday, the fort was captured and Francoise Marie was forced to watch, with a rope around her own neck, her brave soldiers hanged. She died soon after, perhaps from a broken heart. 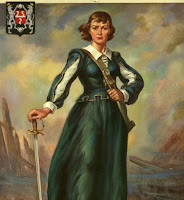 Since then locals have reported the sightings of a woman dressed in an old-fashioned gray dress who walks along the shore near the fort's site. Her grave was never found. She might be waiting for that event so she may rest in peace, and receive the heroine's burial she deserves.

Madame de La Tour led a courageous life in Canada and France; for more on her click HERE

Diane Parkinson (Diane Scott Lewis) grew up in the San Francisco Bay Area, joined the Navy at nineteen and has written and edited free-lance since high school. She writes book reviews for the Historical Novels Review and worked as a historical editor for The Wild Rose Press. She’s had several historical novels published. Diane lives with her husband in Western Pennsylvania.

For more info on my books please visit my author page: BWLpublishing.
Or my website: dianescottlewis.org
Posted by Diane Scott Lewis at 4:34 AM