The wonderful Canadian Historical Brides series are all about strong women who forged a life in the provinces of Canada at various time periods.

For more info on ON A STORMY PRIMEVAL SHORE, thwarted lovers Amelia and Gilbert, see link at bottom of page.

Here's the story of my wacky Greek wedding. In 1975 I was in the navy and stationed in Nea Makri, Greece (the base is closed now).


My fiancée, the handsome sailor I'd met on base the year before-George Parkinson-and I planned our wedding, but nothing happened as we hoped.

First, George was married though separated. Everyone shook their finger at me for dating a married man. But he contacted a lawyer back in Pennsylvania, his home state.

George and I did the unthinkable, we moved in together. My doctor told me to go off my birth control pills because they suppressed my ovaries, and guess what, soon I had a bundle of love on the way—and still no divorce in sight. It took a year for the divorce to come through.

I was six months along by now, but skinny enough to not show too badly. 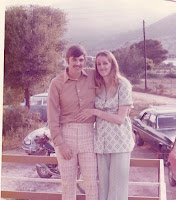 Then Turkey and Greece attacked the island of Cypress, both wanting possession. America refused to take sides in the conflict. Greek students rioted over the American military being on their soil. Each morning we had to check under our car’s wheel wells to make certain no bombs had been planted. The US Fleet was ordered to evacuate Athens. I worked in the Message Center, and frightening warnings of attacks on Americans buzzed over the teletypes.

Greece closed the ports and airports, and George was trapped in Italy. He'd gone to play softball with the base team before the 'war' started.

In a panic, I knew I had to hurry and marry before my time limit was up for boarding a plane for home. Back then you couldn't fly after your seventh month of pregnancy. I was discharging from the navy and they'd assigned me my departure date. The clock was ticking.

Finally, the ports opened up and George made it back to the base. We had three days to throw together a wedding.

We have two sons, and two beautiful granddaughters. No fancy wedding, but a long marriage.

Next year we'll celebrate out 45th year together. And they said it would never last!

To purchase my books at Amazon or All Markets: Click HERE
For more information on me and my books, please visit my website: www.dianescottlewis.org

Posted by Diane Scott Lewis at 5:17 AM