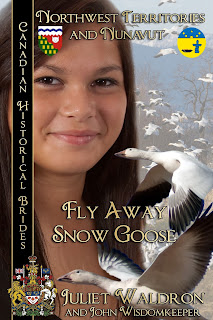 Ah Canada! I learned so much about NWT and even a bit about neighbors like B.C. and Alberta in the process of writing Fly Away Snow Goose. The land, so important in the story, got into my head until I began to have a fantasy about traveling to see it.

The kind of travel I envision, is the kind that, ideally, a 30 year old should undertake, but heck, it doesn't stop me from imagining. So here it goes: my dream of a northern adventure, carried out by some athletic babe ideal of my physical self at 34. (Not that this powerful woman ever existed!) For some reason, the fantasy-prone being who inhabits this body always wants some sort of hardship to accompany her dream travel. In my real crone self, each of these travel destinations would be a tough slog, only available to a stateside person with bucks.


Nevertheless, dream on! How about starting this journey in Alberta with a trip to Jasper National Park Dark-Sky Preserve in the winter as part of a dark skies tour? Where the temperature falls to -22 routinely, it would be a good thing I'm not an astro-photographer, like the adventurers whose story inspired me: folks I read about in an issue of Earth-Sky* who have taken mind blowing starry images.* 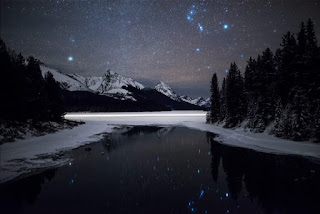 To see the stars glowing like Tesla-fired blue globes, reflecting upon icy water would be an incredible experience. Even virtually, it's a gift to me, these images of a glorious, nearly pristine world. If I was actually there, I'd feel the searing cold in my lungs (it probably would turn them inside out) and feel frigid air demons gnawing at any bit of exposed skin. I'd hear the crunch of the snow under a pair of massively high-tech winter boots. Maybe, in the distance, perhaps I'd hear wolves howling.

Wood Buffalo Park, a UNESCO World Heritage site, is also in Alberta. Here, nature proceeds as it once did, before the incursion of strangers from the west. This is a place for summer travel, I'd come prepared for the onslaught of insects and prepared to see plants and animals I've never seen before.

"Wood Buffalo National Park is the most ecologically complete and largest example of the entire Great Plains-Boreal grassland ecosystem of North America, the only place where the predator-prey relationship between wolves and wood bison has continued, unbroken, over time."

I’ve always wanted to travel back in time, and this park would offer me a window into the way the land was before Europeans arrived. Wood Buffalo Park is the only breeding ground for the magnificent Whooping Crane, a species on the edge of extinction.  Perhaps I'll imagine myself there in spring, when they arrive, calling to one another with their beautiful whooper voices!

The Wood Buffalo which lives there is another species under extreme pressure, a marvelous relic from the Pleistocene. This buffalo's woodland life style is different from the plains animal with which we down from south are more familiar.

And then, because this is an imaginary travelogue without budget or schedule, I'd fly to Yellow Knife in the Northwest Territories and see a modern frontier city perched on the edge of the Great Slave Lake. After a few days of people, I'd be ready to begin my voyage into the North Slave, the land of the Tlicho, the tribe from which Sascho and Yaotl come.

Here, in a land of stone, water, and ever-dwindling forests I'd follow the rivers, muscle my way across portages, while following the ancient trails, like Sascho and Yaotl, on their way to Great Bear Lake, to see a body of freshwater even larger than Great Slave, a veritable ocean. Of course, this would take a very long time, a lot of supplies and a lot of willpower--even on a fantasy journey. Perhaps I'll imagine I'm back in time, in another body in another world, making my way north with a family group, working my fanny off as women always do, carrying and cooking and minding kids.

An easier way to reach Great Bear would be to make the whole thing modern, to imagine floating the Mackenzie to Tulita, then, where  the Great Bear River empties, turning east and traveling along that tributary to Deline. Here I could make a pilgrimage to the home place of the famous Sahuto'ine Prophet, Eht'se Ayah. 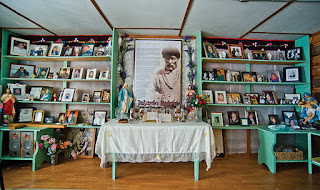 In March of 2016, Great Bear Lake and the surrounding area became the largest UNESCO Biosphere Reserve in North America. The people of Deline are now self-governing, their charge to protect the lake and to preserve their ancient mystical connection with it. The old ones believed that beneath Great Bear's surface a massive heart beats. This is a great magic, one which "gives life not only to the surrounding area, but to all the natural world." 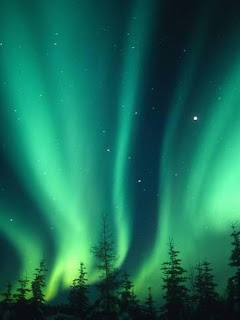 Standing on the edge of this astounding place, for the grand finale, I'll conjure up a display of the aurora borealis, those shimmering spirits of ancestors, who remind us of how astonishing it is to be conscious and to be able to view these incredible wonders of our earth.

Even, in this case, if it's only a Canadian journey of the mind.