The Mi'kmaq of New Brunswick

In my research for my novel set in New Brunswick, I came across the two main native tribes that lived there. I touched briefly on them in On a Stormy Primeval Shore, but they deserve a more in-depth introduction. 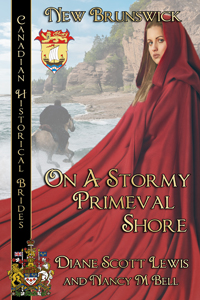 First, the Mi'kmaq people. Known as one of the original settlers of the Atlantic provinces, oral history (and archeological discoveries) suggest the Mi'kmaq have been in eastern Canada for over 10,000 years. The name is thought to mean "one of high ability." Other sources say it means "my friends." They refer to themselves as First Nations.

The men hunted and fished, and went to war to protect their families. Women tended the children, gathered herbs, and built the traditional wigwam. These homes are made of wood covered in birch bark. The people lived in villages, usually near water sources.
Men wore breechcloths (a skimpy garment that covered their privates) and leggings. The women wore tunics, long skirts and a peaked hat. They decorate their clothing with dyed porcupine quills, a skill they are famous for.

Chanting is another tradition, consisting of vocables (broken syllables) that express emotion rather than words with meaning. The Mi'kmaq language is part of the Wabanaki cluster of Eastern Algonquian languages.

Feathers are only worn in their hair during ceremonies. Bothe men and women wore their hair loose and long. White settlers complained, "I can't tell the men from the women."

The Mi'kmaq paddled in canoes, or traveled through the winter snow in sleds and snowshoes. The English word "toboggan" comes from the Mi'kmaq word for sled. Dogs were their pack animals in the years before colonists brought horses to Canada.


When the French came in the 1600s many of the Mi'kmaq converted to Catholicism. But European diseases resulted in the death of half their population. Conflicts with the French ensued, though the natives worked together with the French in fur trade.

The British colonization of the eighteenth century brought about the slaughter of the French (Acadians) and breaking and remaking of treaties. The Mi'kmaq were pushed off their fertile land.
The English wanted to alter the indigenous peoples' way of life. Today the 'rights' of the Mi'kmaq are better protected, but their lifestyle is forever changed, their traditions usually limited to special  ceremonies.


To learn more about the Mi'kmaq please see the Canadian Encyclopedia link below.

To find out more about the formation of New Brunswick in On a Stormy Primeval Shore, or to purchase my books at Amazon or All Markets: Click HERE


For further information on me and my books, please visit my website: www.dianescottlewis.org


Source: Canadian Encyclopedia
Posted by Diane Scott Lewis at 1:00 AM