The second First Nation's people of New Brunswick, Canada, that I included in my novel, On a Stormy Primeval Shore, were the Maliseet:

This tribe is Algonquian speaking, called Wolastoqiyik or "People of the Beautiful River"; but the Mi'kmaq (showcased in a previous blog) named them "Maliseet" or broken talkers because their language sounded like a broken version of their own.

Indigenous to the Saint John River Valley, Maine, and Quebec's St. Lawrence River, the Maliseet fished and hunted these areas for thousands of years. They considered the Mi'kmaq their allies. Eventually the Maliseet turned to farming as well. They lived in wigwams in walled villages. They made tools out of wood, stone, and ceramics. Canoes, weapons and eating utensils were also created. The Maliseet have a rich cultural history, similar to the Mi'kmaq, such as decorating clothing and baskets with painted porcupine quills.

The Maliseet bands were governed by one or more chiefs who sat on tribal councils with representatives from each family.

Drums played an important part in their ceremonies and united their communities. 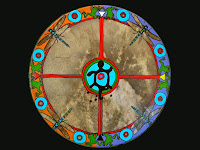 When the European settlers arrived, first the French in the 1600s, then the British in the 1700s, the natives has their agricultural territory on the river confiscated, and they were pushed to the less fertile parts of the country. In the nineteenth century, they were sent to Reserves, but later filed land claims to recoup their losses; some were successful.

While the Europeans tried to convert the natives to Christianity, many clung to their original beliefs. "Smudging" -- the burning of sweetgrass to cleanse the spirit -- is one. Their Creator, Gici Niwaskw, is not assigned a gender. The Creator formed the entire world, but taming the landscape is performed by the cultural hero, Gluskabe.

Posted by Diane Scott Lewis at 1:00 AM