The Politest of Battles

There is an island that has been in dispute since the 1930s.  Two countries claim it, and a continuous thirty-year battle has been fought over it.  Yet no blood has been shed, no lives lost, and no feelings hurts.

It has to be the politest of battles I have ever heard of.

Where is this miraculous place, that causes such feelings of peace and brotherhood, even in the heat of contested ownership?

Now don't start thinking of lust landscapes and plentiful resources.  The island in questions is called Hans Island, and it is found in the Arctic North. 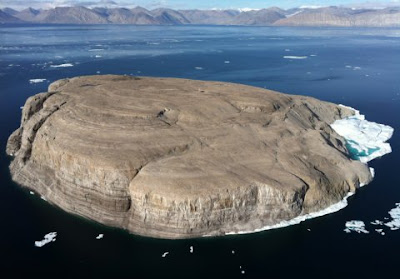 Spanning approximately 1/2 mile, this tiny island has been claimed by both Canada and Denmark.

"Hans Island is located in the middle of the 22-mile wide Nares Strait, which separates Greenland, an autonomous territory of Denmark, from Canada. Due to international law, all countries have the right to claim territory within 12 miles of their shore. As such, Hans Island is technically located in both Danish and Canadian waters." 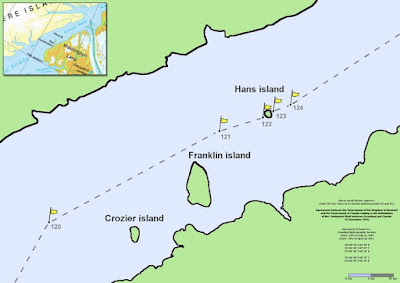 In the 1930s, the island was determined to belong to the Danish, by the League of Nations.  When the League fell apart, and was replaced by the United Nations, that ruling held little standing.

Over the years since, wars happened, and the tiny island in the middle of Nares Strait slipped from our consciousness.

That year, Canadian troops visited the island and planted the Canadian flag. They left a bottle of whiskey to greet visitors.

Soon after, Denmark's Mister of Greenland affairs visited the island, and reportedly planned the Danish flag, left a note that said "Welcome to the Danish island" and included a bottle of Danish Schnapps as a welcome gift.

Every so often, over the last few decades, either side would visit the island, change out the flags, and leave a bottle of spirits (whiskey or schnapps). 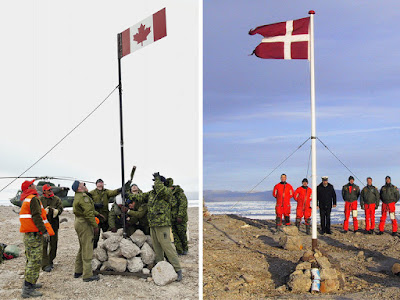 And thus - the whiskey war has been faithfully fought for years.  Without one loss of life.  Although, there surely have been a few drinks raised in honor of, if not fallen comrades, then claiming Hans Island for the mother country.

In 2005, both countries agreed to work to come to an agreement on the disputed land, although as of 2015 no resolution had been reached.  In 2016, they started working on some kind of a plan to share the island ...