My mother’s parents had a beautiful backyard in the small Ohio town of Yellow Springs. Their house and backyard are the very first I remember. I was a war-time baby, and because of the housing shortage, my mother lived with her folks for some years while my father was serving over-seas.

Grandpa had made his yard special by that time, but when they first came to town, in 1927, the “yard” was barren. The only tree was a young sugar maple which provided afternoon shade. 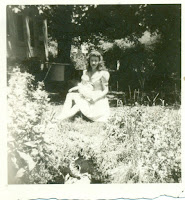 Grandpa Liddle was an English Professor, but he’d been raised on a farm, so he knew how to grow things. By the time I’d reached consciousness—say, 1947—his backyard had become a lovely place, now hidden from the neighbors by a living wall of cedars.

Inside this, twenty years on, was a flower garden, where colorful Dutch bulbs bloomed in spring—daffodils, tulips, anemones, narcissus—followed by all kinds of lilies and roses in summer, as well as Canterbury bells, bachelor buttons and a host of other familiar plants. There was also a pear tree, a stand of raspberries, a grape arbor and rhubarb. All the surplus was either turned into jelly or canned for winter use. In summer fresh fruit was always on the menu—my cornflakes always had raspberries; our lunches were accompanied by pears or grapes.  In the shadiest part of the yard, by a small stable which sheltered the ponies that belonged to his daughters, he had a wildwood area. This contained a variety of ferns, trillium, phlox, wild violets, and bleeding heart. Dutchman’s Breeches  and Dutchman’s Pipe were two of the oddest denizens of this garden. 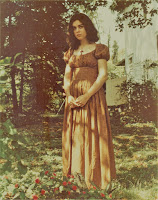 Under the big maple, on the brick patio—another home improvement --in good spring weather, he’d occasionally host a small senior literature class in Milton, Chaucer, or Shakespeare. This was not a problem for the students generally, as the house was only two blocks from the college and bicycles, in those days, were part of campus life. If I arrived in the middle of one of these classes, I knew to quietly head into the house. Here, I’d find Grandma in the kitchen, getting a proper English tea ready to serve. Of course, there was always some for me.

Grandpa also had a little pond for goldfish. Nearby, he planted two sweet cherry trees, one for me and one for my cousin, Michael. Pies made from the fruit are another happily remembered treat, fresh ones in summer, followed by winter’s, made with Grandpa’s canned cherries. The pond was my favorite spot to sit, where I waited to glimpse furtive tail-flicks of orange. I usually fed the fish when I visited. As soon as they spied me, peering down at them from my dimension of air, they would obligingly rise to the surface to take whatever I’d brought. ( I suppose, however, that, ordinarily, the resident mosquito larva kept them quite well.) In the autumn, Grandpa would dip out the pond and put the fish into a tank on a side table in the sunlit breakfast room. Mostly, the goldies survived to return to the pond again in the spring. Some of these wintered-over fish grew quite large. 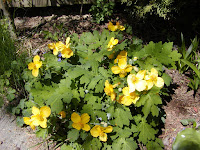 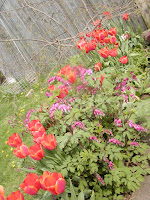 There were two weddings held in this garden, first that of my parents, and later, post-war,  of my Aunt Juliet, where I was the flower girl and my Cousin Michael, still in diapers, was the ring bearer. Later on, I nursed my first son sitting in that same utterly private backyard, while my grandparents told my husband and me stories about their 1927 arrival in this small middle-western town.