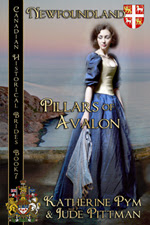 Nostalgia comes from memories and our minds burgeon with them, overflow onto our current visual space. As we gather new memories, we merge them with the old.

I’ve been thinking a lot lately of the town where I grew up. It was one of the greenbelt projects FDR initiated during the Depression. We lived in the Greendale community.


It put men to work, building a country hamlet with the amenities of a city. The people who lived there had to make a certain income. My dad was short by a few dollars. He had someone vouch for him.

We had a grocery store, a Five & Dime (run by two harridan spinsters), drug store, theatre, doctors and nurses. When mom took me to the doctor for a smallpox vaccination, I didn’t cry, so the doctor inoculated me again. The nurse was a big boned woman who walked all over town, visiting homes and administrating cough syrups. Her hair was stone grey in a thick braid that she wound around her head. Even as a young child, the town’s nurse made an impression on me. 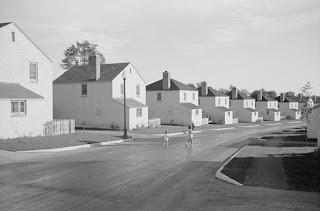 There was a public school, grades kindergarten to 12, police department, and a tavern called the Village Inn, with a bus line into the city. It was a good place to grow up.

The houses were incredibly small, but very well built with cinder blocks. The ceilings were raftered. Everyone had a small garage for their tools and car, if you had one. Kids could play in the streets, stay out until the streetlights came on.

I’d walk outside into the cool breezes and smell fresh grass clippings, raising my head and listen to robin’s song. When the summer nights were gentle, our windows would be open. As dawn lit the bedroom, robins began their day. It was a balm to my ears and I’d sigh. I’d be reminded life was good. I was protected and safe.

I’d explore with my brothers over rutted paths with puddles from last night’s passing shower. If I were a pioneer and thirsty, I could drink from the puddle to survive a long trek across country. “Let’s explore that field over there. Maybe, there’s hidden treasure.”

We ran up a hill where a big tree had fallen over, branches and bracken tucked about. It made a good fort. My brothers settled in with their boy scout knives and began to form swords, bows and arrows while I pretended to work in the kitchen, the old tree stump being my counter-top.

Later, after we moved from Greendale, new memories joined with the old. 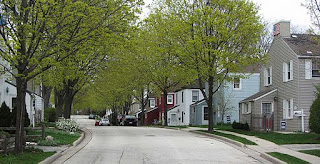 When I see fluttering wings of butterflies, it reminds me of the bright afternoon when, in a moment of quiet serenity, thousands of monarch butterflies blanketed our backyard, resting before they started again on their migration. I can still feel the hot sun on my shoulders as I stared out the back door. I did not move, afraid I might jar them into flight.

I went to my son’s room where he had just been put down for a nap but he was asleep. I could not rouse him. When I returned to the back door, the butterflies were gone.

Nostalgia can give you a nice afternoon, away from the thunder of violence that seems to have pervaded our world these days. It’s like a good book. We can escape into past memories for a while but we don’t want to get lost. When the story in the book says, The End, we close the book. We reenter the world of our lives that can be tumultuous, difficult, and far away from our sweet memories.

But we can always go back. Yes, we alone have the power to open those nostalgic doors.

~*~*~*~*~*~
Many thanks to Wikicommons, Public Domain
For more info on the greenbelt projects: https://livingnewdeal.org/tag/greenbelt-towns/
Posted by Katherine Pym at 12:30 AM