Nostalgia is defined in the dictionary a wistful desire to return in thought or fact to a past time in one's life, a home or homeland; a sentimental yearning for the happiness of a former place or time.

I feel my venture into historical fiction writing began as ‘a wistful longing’ but more for a time I didn’t personally remember as much as one I immersed myself in voluntarily. I have never lived in Edwardian England but all the images, videos and stories I discovered and devoured with enthusiasm made me want to recreate in my stories. 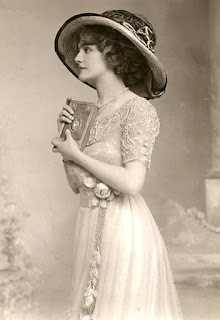 The pleasant aspects are easy to incorporate, like the beautiful and feminine clothes, gentle manners and a respect for others which sometimes seems lacking in modern day life. Not so much the rudeness of strangers, but the fact a gentleman was expected to act in a certain way.

As a matter of course he would show respect to and be protective of a lady, any lady, not just a relative. He would always doff his hat, offer a seat, or escort a female onto a train etc. Putting aside the fact men regarded women as weak, unreliable creatures with little intellect, their outward behaviour was attractive.

The more cruel aspects of life in the early 20th Century are harder to incorporate into a story without the risk of alienating readers – In one of my books a character who had been universally loved by my readers was suddenly regarded as a heartless, misogynist, condemned for his adherence to the principles of the day.

Then again, an Edwardian man who accepts his wife wants a career and refuses to stay at home all day polishing the floors would have been considered weak and unmanly not to have control of his household. Women didn't run their own lives, even wealthy ones; a difficult view to portray and keep the characters identifiable to a 21st Century audience.

I'm sure I wouldn’t have been so keen to go back to 1900 when I was younger, but now the idea of spending my day in gentle pursuits, arranging dinners and flowers with a bit of embroidery and visits to my dressmaker, taken to and fro by a chauffeur appeals - provided I would be born into the right strata of society to achieve this.

Mind you, my dinner conversation would be frowned on as I would have been an ambassador for politicians like Keir Hardie who advocated a tax be put aside from wages for free schooling for working class children and pensions for the elderly – ideas ridiculed at the time by the ruling class. They would probably have had me bodily removed from Simpson’s dining room for such views – not the main one of course as women weren’t allowed in there – at all.

Perhaps the western world in 2017 is a better place to live after all, especially for women.
Posted by Anita Davison at 3:12 AM