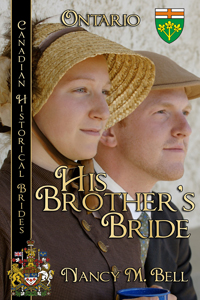 The youngest child of the local doctor and evangelical preacher, Annie Baldwin was expected to work hard and not protest. Life on a pioneer farm was tough so neighbors helped each other.

George Richardson the underage Doctor Bernardo Boy, orphaned and shipped to Canada a few years earlier, is loaned to the Baldwins to help bring in the hay. Younger brother Peter Richardson was placed with another neighbor, so the brothers stayed in touch with each other. The Great War brought a lot of changes to life even in the back woods of Ontario. In spite of the differences in their social standing, George and Annie fell in love.

When George departed for France they had an understanding and he promised to return to her when the war was over. Alas, fate had other ideas. After a long silence, Annie received the much anticipated letter. But it wasn’t from George, but from his brother, Peter. Also in the trenches of France. George was killed during the final push on August 8, 1918 at Marcelcave near Amiens. The two who loved him form a long distance bond via censored letters. When Peter is sent back to Canada, rather than return him to the east where he enlisted, he is discharged in Vancouver.

Sick from mustard gas poisoning and penniless, Peter finds work at Fraser Mills. Once he could save enough money he planned to return to the small farm in the northern Ontario bush, but before he does, he sends Annie a box of chocolates in the mail. Inside the box he hid an engagement ring. Bound together by their love for George, they find solace in each other. Will it be enough to last?