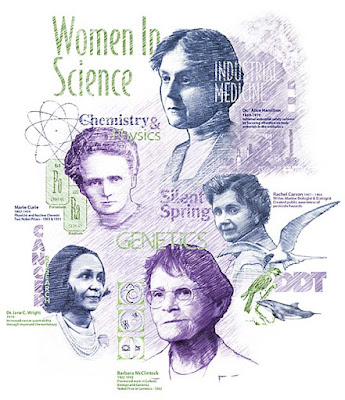 History is full of stories of men.  Powerful men; warriors, kings, champions, knights, explorers, and emperors.  The stories of women are so few - Catherine the Great, Hatshepsut, Elizabeth I, Cleopatra.

Male Scientists, leaders in their fields, and discoverers are plentiful as well.  In the man's world of science, for centuries women were either shut out, if they were allowed in it was hidden, or they masked their identities behind their husband.

Even in the 1950's, when the race was on to discover the very essence of what made life possible, the secret of DNA, women were looked down up; Watson and Crick were given all the credit for discovering the structure of DNA while many have never heard the name Rosalind Franklin.  Sure we know some names - Marie Curie being one of the most well-known, followed by Jane Goodall, but so many are relegated to the background, to obscurity.

Here are a few of Canada's Pioneers in the field of science.

Dr. Ernest Rutherford is a staple of chemistry textbooks, from high school through college level.  His gold foil experiments led to our understanding of the behavior of atoms.  Yet it wasn't until I was researching for this post that I came across Harriet Brooks, who was Canada’s first female nuclear physicist.  She worked alongside Rutherford as well as with Marie Curie.

Everyone knows that we have a polio vaccine.  Many know that Jonas Salk's work on the polio virus led to the vaccine.  But even in a microbiology class, I was never taught about Leone Norwood Farrell, whose work made it possible to mass produce Salk's vaccine.  Without her, the vaccine wouldn't have saved near as many lives.

In the field of paleontology, of the study of long dead (but once living things - like dinosaurs) there are tons of notable men, but few women.  I learned about Mary Leakey and Mary Anning in my Dinosaurs of the Mesozoic class because they were the exceptions to the male rule.  Canada boasts a woman who pioneered a new field in paleontology - the use of microscopes to examine tiny, microscopic fossils, the kind that can be used to tell an enormous amount about the changes of a landscape over millions of years.  That scientists is Frances Wagner.

Those are just a few of the big names ...

There are also pioneers that didn't discover big things, that didn't start a totally new field of study - but instead pushed against the "no women allowed" belief and became the first in medicine - like Maude Abbott, who was among the first group of female medical students and who later went on to do pivotal work on congenital heart disease, or Carrie M. Derick, the first woman to be appointed a full professorship at a Canadian University and who works on our understanding of heredity.

If you, or a young female you know, is interested in learning about a career in the science field check out the Society of Canadian in Science and Technology.

If you are interested in learning more about the Pioneer Women in Science in Canada, check out these following articles.  There are so many more ... this is just a sampling.

And Canada doesn't stand alone with women pioneers in science ...

If you are interested in learning more about the Pioneer Women in Science (globally), check out these following articles.  There are so many more ... this is just a sampling.

Women Scientists Who Changed the World

Celebrating Women in Science and Engineering

Celebrating the Work of Women Paleontologists

Posted by The Historian at 7:00 AM