Elisabeth Van Alen, heroine of "Where the River Narrows" (Quebec)

In celebration of Canada’s 150th birthday in 2017, Books We Love has taken on an exciting project: the publication of 12 historical novels each set in one of the 10 provinces, the Yukon Territory, and a combined Northwest Territories and Nunavut. As I’m American, I’ve been teamed with Ronald Ady Crouch, a Canadian BWL author who brings a unique set of talents and interests to the project.

Scheduled for publication in the summer of 2018, Where the River Narrows (which is a translation from the Algonquian, “Kebec”) is set during the years of the American War of Independence. This was a tumultuous time for all involved, but especially unsettling (both figuratively and literally) for those who chose to remain loyal to King George III of England.

The story begins in June of 1774. Elisabeth Van Alen is the second child and eldest daughter of Cornelis and Catrina, well-to-do New York Dutch landowners in Tryon County, New York, on the Mohawk River. Her life has not been an easy one, however, as her mother has abdicated her role as matriarch after a succession of heartbreaking losses, leaving 19-year-old Elisabeth in charge of the daily chores of running the household and looking after Catrina, her younger siblings and father. Beth proves herself capable and industrious, but has relegated to the back of her mind any thought of marriage and having a family of her own.

When her older brother Samuel returns home from Kings College in New York accompanied by his darkly handsome friend, Elisabeth’s life takes on new meaning and her dreams are rekindled. She finds in Gerrit Bosch a soulmate, a man of wit and intelligence, but lacking in family and means. He’s indebted to Sir William Johnson, the Superintendent of Indian affairs and undisputably the wealthiest man in all of New York. Sir William has underwritten his education and has promised Gerrit a position assisting Mr. Hall, the teacher in his settlement of Johnstown.

A month later, following an impassioned address to a convention of Indian leaders at Johnson Hall, Sir William is suddenly stricken and dies a few hours later, an event that changes the course of history.

The thirteen colonies have been in an uproar for years and are now on the brink of revolution. Sir William had been a source of calm and caution, especially where the Mohawk and other members of Iroquois Confederation were concerned. His son and heir, Sir John Johnson, is not so much so. A year later, after all-out war has broken out in Massachusetts and spread to New York, John Johnson and his supporters, in defiance of the new authority in Tryon County, declares himself for the king. In May 1776, he and over 170 of his followers escape arrest and undertake a daring and dangerous escape to Canada, where he musters a loyalist regiment, the King's Royal Yorkers. Among his followers are Samuel Van Alen and Gerrit Bosch. 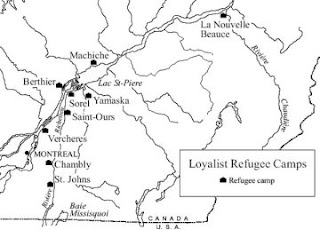 The consequences of this action are dire for the Van Alen family. When he refuses to sign an “association” (a declaration of allegiance to the new government), Cornelis is hounded and persecuted by neighbors and committee members, ultimately leading to his death. Not long afterwards, the family’s house and lands are seized by the local authorities, and Elisabeth, her two young siblings, her mother and devoted servants, the Freemans, are forced to flee.

The story from this point follows their harrowing trek through the wilderness in late fall into early winter, and the survivors’ arrival at Fort Chambly, and from there to a refugee camp in Sorel and later at Machiche. Details of Elisabeth’s journey are drawn from numerous accounts and depositions of women who made similar journeys during this time: Tales of overcrowded camps teeming with disease and insufficient food, of hastily constructed barracks shared by more people than could safely be accommodated, and of a provisional government barely able to accommodate what would become a flood of immigrants by the end of the war, placing demands on the limited resources needed to fight in a losing cause.

Needless to say, this is a story of survival and endurance, which ends happily for Elisabeth and Gerrit. It is after all, a “Canadian Brides” tale :-)

Kathy Fischer Brown is a BWL author of historical novels, Winter Fire, Lord Esterleigh's Daughter, Courting the Devil, The Partisan's Wife, and The Return of Tachlanad, her latest release, an epic fantasy adventure for young adult and adult readers. Check out her Books We Love Author page or visit her website. All of Kathy’s books are available in e-book and in paperback from Amazon, Kobo, and other online retailers.

Posted by Kathy Fischer-Brown at 12:01 AM