I Shoulda Kept on Writin'

I began to pen stories at age five, or rather I drew the pictures and my mother wrote in the words I dictated to her.
I loved telling tales, writing of ancient Egypt and Rome (I'd just watched the moved Cleopatra). I also wrote with my best friend. Together we concocted a murder mystery ala Alfred Hitchcock (we'd just watched the movie Marnie).

We drew pictures to go with our stories and that was half the fun. My best drawing had nothing to do with my novels but was of my favorite cat, Lucretia. I might have been fifteen when I drew this. 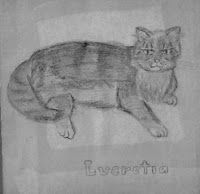 When I started working in an office at eighteen, and was so efficient I had time left over, I wrote more stories and kept some. I read them not too long ago and one was very good.

But at nineteen I joined the navy and traveled all over, married, had children, and let my writing slide.

I should have honed my skills, taken classes, and kept on writing. I had a workshop with bestselling author Sherryl Woods years later, and she said in the 80s everyone was being published. I missed my chance, because I hadn't written through most of the 70s and throughout the 80s. I only picked it up again in the mid-nineties.

When we were stationed in San Diego in the late 70s, I should have taken creative writing classes, but somewhere along the way I'd lost the urge to write. An urge I once couldn't deny or ignore, it had burned inside me, compelling me to constantly spin tales.

I forced myself to write again in the late 90s, to see what I could come up with. My story meandered all over the place. I researched at the Library of Congress, got library loans, and stuffed all the fascinating details into my book. No internet for the average person existed yet.
I thought I knew everything there was about writing, but soon found out I knew very little. I had rejections galore.

My next move was to join critique groups and learn to edit my work. Busy with family and a job, years went by before I polished my first novel. A small press took it on, but their e-books were overpriced, and paperback prices outrageous. Finally, a good friend invited me to submit to my current publisher, BWL, and my first book, now titled Escape the Revolution, sold very well.

To sum it up, if you have a dream, pursue it!

My latest project is part of the Canadian Brides Series.

Blurb: In 1784, Englishwoman Amelia Latimer sails to New Brunswick to marry a man chosen by her father. Amelia is repulsed and refuses the marriage. She is attracted to a handsome Acadian, Gilbert, a man beneath her. Gilbert fights the incursion of Loyalists from the American war to hold onto his heritage. Will they find love when events seek to destroy them?

E-book and paperback are available at Amazon and All Markets

For more information on me and my books, please visit my website: www.dianescottlewis.org
Posted by Diane Scott Lewis at 7:30 AM