Opposites attract? Can an Englishwoman and Acadian Fall in Love?

February is considered the month of love due to Valentine's Day. The old saying is that opposites attract, but is it true?

In my Canadian Historical Brides novel On a Stormy Primeval Shore, I bring two people together from different cultures who meet in the strangest of ways. Amelia is an Englishwoman fresh off the boat in a wild country, the just formed province of New Brunswick in 1784. She's come there at the father's behest to marry one of his officers at Fort Howe.

However, she is repulsed by the rude man, who treats her like a pity-project, and refuses to marry him. Deciding to stay, she struggles to form her own life in herbal medicine in a burgeoning country.

Gilbert, a trader, is an Acadian, descendant from the original French settlers when that area was known as New France. The Acadians hate the English after these invaders swept in, murdered the French, and took possession of what would become Canada.

He had no intention of courting an English miss, but fate was against him. Will more be in store for these star-crossed people?

A growl startled her. Turning, Amelia gasped. Out of the trees lumbered a large, snarling black bear. The animal’s fluid grace belied the menace in his glare. Saliva dripped from the creature’s mouth when it bared sharp teeth. Fear shot through her like arrows.

Louise froze, eyes bulging. Amelia instinctively stepped back. Her foot found no purchase. She slipped, tumbling down the short embankment, rocks poking into her flesh. Her gloves were ripped off as she groped. She landed with a thunk in the marshy soil next to the stream. She struggled to rise amid her tangle of skirt and petticoats. Hips and knees aching, her hands smarted, scraped and embedded with pebbles, but she scrambled to her feet to scuttle up the hill with muddy fingers to help Louise.

She wanted to call out to the girl, but that might attract the bear. Nearing the crest, dirt dislodged above her, sifting down on her face and scalp. Amelia blinked up, her pulse hammering. She heard movement, footsteps.

A large man with a black beard, wearing buckskin clothing and a leather hat, stood at the top of the slope. He aimed a musket in the direction of the bear. The animal growled louder.

"Don’t move, either of you, mes jeune femmes," he commanded in a French accent. 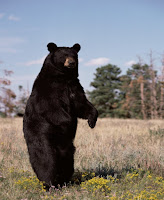 Gilbert prepared to fire. “Sors d’ici!” The bear swiped again, knocking the musket from his hands. Claws scraped his right arm. He hissed at the scratching of his flesh, the pain radiating up to his shoulder. The animal snapped at him, teeth close.

Gilbert ducked, just missing a bite from those teeth, his face sprayed with saliva. He reached for the musket, his breath harsh.
The young woman (Amelia) crawled to her feet. She screamed like a lunatic, but it sounded more from anger than fear.
* * *
The handsome Gilbert, a man about to be pushed off his land by greedy Loyalists, will be impressed by a woman who screams at bears. A most unsuitable courtship has begun.
To purchase my books at Amazon or All Markets: Click HERE
For more information on me and my books, please visit my website: www.dianescottlewis.org
Posted by Diane Scott Lewis at 12:00 AM