A Yank, I knew next to nothing about Canadian history, but this has certainly changed since I became joint author with John Wisdomkeeper of Fly Away Snow Goose, one of the books in the Canadian Historical Brides series. The first fantastic facts I learned were political, from the period of European migration, after these (already occupied) lands had been parceled up by European nations. 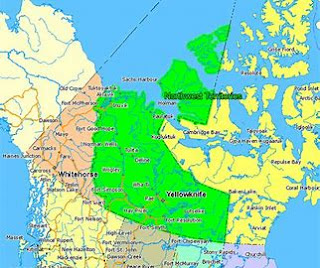 The Northwest Territories remain an immense region today, but once they were even larger, comprising the entire midsection of Canada. In the 1870's this vast area--which had been designated Rupert's Land* and The Northwestern Territories--was acquired by the Canadian government from The Hudson's Bay Company and Great Britain. 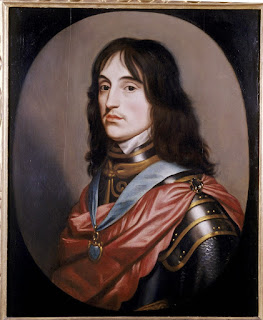 Prince Rupert, swashbuckling, semi-piratical nephew of the hapless, beheaded Charles I
In those days, the Northwest Territories stretched from Ontario to the Yukon and included today's provinces of Saskatchewan and Alberta. It grew even larger in 1880 when many Arctic Islands were transferred to the Canadians too. Sir John Macdonald, the first Prime Minister, wished to construct a British nation and also to keep out American settlers. This is analogous I think to the period in American history when the Louisiana Purchase during the time of Thomas Jefferson doubled the size of The United States.

The geological age of the region is immense, tickling my "way back machine" fantasies. The Canadian Shield is 3.96 billion years young, some of the oldest rocks on the planet. They have been stripped bare by a series of glaciations, the last of which came in the Pleistocene. Those ancient miles thick sheets of ice that once covered this land have left their tracks in meandering waterways, low undulating plains piled with heaps of sands and gravel, bogs and tundra, places where the permafrost is just now is beginning to melt. Those barren lands are the home of caribou and many of the fur-bearing animals that the Europeans were eager to buy. They were also the hunting grounds of the Tlicho, Dogrib, Yellowknives and other aboriginal people of the region. 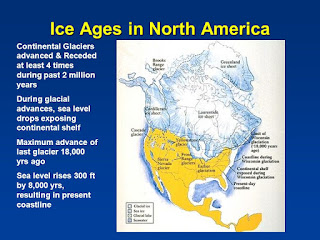 Read the names of the aboriginal people who still comprise one half of the population of the NWT:  Dene, Inuit/Invialuit & Metis, Chipeweyan, Dogrib, Yellowknives, South and North Slavey, Gwich'in and Sahtu. There are still eleven languages spoken in the NWT: Chipaweyan, Cree, English, French, Gwich'in, Inuinnaqtun, Inuktitut, Inuvialuktun, North and South Slavey and  Tlicho. (The young couple, Sascho and Yaotl, whose story Fly Away Snow Goose tells, are Tlicho.)

Recently, I've been reading some human history of a different kind, the astonishing discoveries that appear almost daily in science columns, the marvelous stories written in our human DNA.  There have been many ideas about where the original aboriginal people of the Americas came from, but the most recent discoveries, tracing DNA, seems to point toward a group of people who came from Siberia, perhaps as long as 24,000 years ago. These people may have crossed the glacial maximum land bridge from Asia to a now drowned land called Beringia. 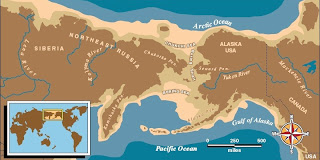 Beringia
Rising sea levels may have been the culprit that left these migrants, who probably came hunting big game across the glaciers, isolated for a very long time--5,000 to 8,000 years. The "Beringian Standstill" as this theory is called, is now well on its way to being proven. During this immensely long interval, those hardy Asian adventurers, carrying fifteen mitochondrial DNA strands, developed some notable genetic variations that were adaptive to enduring the frigid climate and to metabolizing an oily fish-and-meat-heavy diet. These same adaptive markers have been shown to exist today in all populations of First Nations, in both North and South America. Imagine what a strange and isolated frozen world these First People inhabited! Imagine the mega fauna and other wonders they discovered as they moved into a hemisphere innocent of human beings. The Inuit and their cousins, the Athapascans, were the first enter North America and make these lands, thousands of years ago, their home.

Sources:
(A Brief History of Everyone Who Ever Lived by Adam Rutherford.)
https://www.amazon.com/Brief-History-Everyone-Ever-Lived-ebook/dp/B06XP9Z5TS/ref=sr_1_2?keywords=adam+rutherford&qid=1555984681&s=gateway&sr=8-2

https://www.thecanadianencyclopedia.ca/en/article/northwest-territories
Posted by Juliet Waldron at 12:30 AM