A Canadian Story by Katherine Pym

My latest WIP is about the original colonization of Ferryland, Newfoundland, Canada. As an international author, I've been honored to co-author this novel with a Canadian author. I've never considered myself an international person. I've always thought 'others who lived elsewhere 'and  out of the USA as international. Seems silly now, to think that way, but there you have it.

My subject matter for this WIP is Sir David & Lady Kirke, a couple who married 1630 in London England and eventually emigrated to Newfoundland, Canada in 1638. They took up residence in the house built for Calvert, 1st Lord Baltimore, who had bitterly complained of the French pirates and bad weather.

I've been having fun with this story. Even though these people were real, one does not know what their personalities were like. There's an inkling here or there. Coming from a wealthy merchant family, David was restless. He obtained letters of marque from King Charles I to harry the French settlements along the St. Lawrence River. He took to heart and did everything he could to cause the French aggravation. 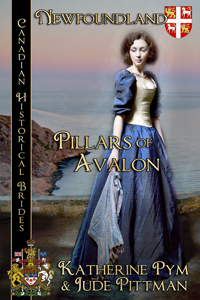 Posted by The Historian at 6:21 PM