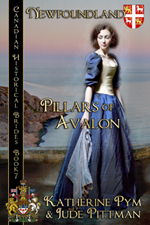 
I’d rather Pillars of Avalon be a miniseries, shown in Canada, England & the USA. It will get a larger viewing audience, since these days, it seems fewer people go to the movies.

With that in mind, Jude and I had a lot of fun coming up with the following to play the character parts. Here is the cast:

Sir David Kirke. I wracked my brain on this one and Jude came up with Russell Crowe. While I’ve never joined his fan club, I do consider him a marvelous actor. He could play the part of David from his younger years in 1628—slathered with makeup—to his death—not so slathered—in 1654.

Lady Sara Kirke. Another near fatal wrack of brains but Jude thought Catherine Zeta-Jones was a good pick. She always comes across as a strong character and Sara Kirke was a strong woman. We’d probably have to have someone else in Sara’s early years, since Catherine is climbing up in age and when Pillars begins, Sara is 18.


King Charles I. After much discussion between Oliver Chris or Jude Law, we decided on Jude Law as a good choice. He doesn’t look much like Charles, but they do wonders with makeup these days. Jude also has the acting skill to make a truly despicable King Charles, who was the bane to poor David for many years. I don't think I've seen Oliver Chris in anything, but Jude has, and said he can belly up to the mark, make a wonderful king.


William Laud. A lot of historians and people of the time hated this guy. He was eventually assassinated but David Kirke admired Laud, and from Newfoundland had struck up a bounteous correspondence with him. He was an older man when we meet him, so I considered Sir Derek Jacobi would make a wonderful Laud.

Frances Kirke, later Lady Frances Hopkins. I thought Joan Fontaine would do well here since Frances is not as dominant as Sara, the younger sister, but she had character and was loyal.

William Hopkins. He was a school teacher and cerebral, thrust into Parliament then eventually became a Colonel in the Royal army. The historical texts never said why he left the army, but I had him wounded. He and his family lived in Newport, Isle of Wight until it became too dangerous after his support of King Charles I. The records don’t show him alighting in Newfoundland, so .... well, you’ll have to read the story to find out what happened. In the meantime, I thought a younger Anthony Hopkins would do. He’s a wonderful actor.

Samuel de Champlain. Even though Dougray Scott is not French, and though he’s looking a bit crusty in his older age, he would fit the bill of Champlain who struggled to stay alive during the harsh winters and wet summers of early Quebec.

Posted by Katherine Pym at 1:00 AM